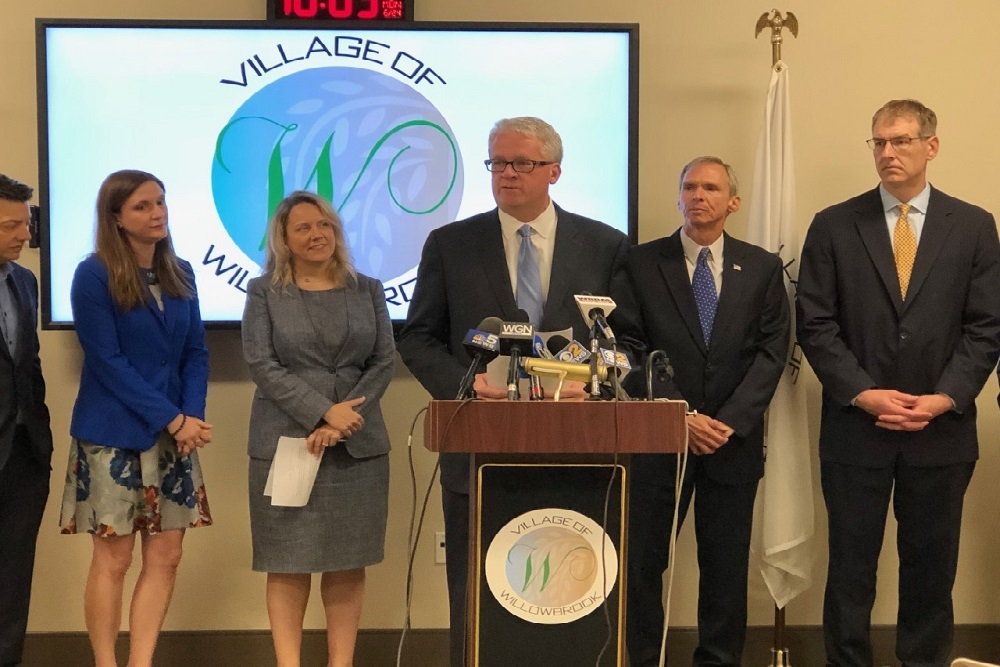 Consent order could return ethylene oxide to active use in Willowbrook; Durkin and Mazzochi co-file amicus brief in opposition. The chemical, which was used by Sterigenics for more than two decades to fumigate and sterilize specialty medical equipment, is linked to cancer and other life-threatening health conditions. Worse, the chemical is volatile and can escape into the air that surrounds places where it is being used. Until very recently, the Sterigenics plant in Willowbrook, a municipality near Interstate 55 southwest of Chicago, used ethylene oxide for sterilization purposes. Air quality samples collected in and around the plant showed that significant quantities of the life-threatening chemical were escaping into the air around the plant.

After public outcry, the State of Illinois ordered the Sterigenics plant to cease its ethylene oxide operations. This order was posted under a law that provides for the emergency shutdown of industrial operations that present on ongoing threat to public health and safety. However, implementation of the law is operated by the Attorney General of Illinois. The Attorney General and his office have unveiled a consent order that contains a Sterigenics remediation plan. Under this consent order and plan, Sterigenics promises to install technology to sharply reduce its emissions of ethylene oxide to “nearly zero,” and the Attorney General promises to let the company reopen the plant’s specialty sterilization operations.

The proposed remediation plan is sharply opposed by many of the plant’s neighbors. They remember that Sterigenics had, for many years, assured nearby residents that the plant was operating safely, with machines circulating ethylene oxide through a sealed sterilization cycle, and was not releasing ethylene oxide into the general air circulation that is breathed by the neighbors of the plant. In reality, however, the State has found that the plant was emitting between 5,000 pounds and 33,000 pounds of ethylene oxide every year of its operation. Furthermore, key Sterigenics personnel knew the chemical was being emitted. Their machines kept telling them that the chemical was disappearing from their tanks, and they kept needing to buy and order more.

Implementation of the plan could return the village of Willowbrook, and nearby suburban municipalities, to the conditions that existed prior to 2019. Ethylene oxide does not smell and humans cannot detect its presence. Willowbrook has more than 8,000 people living in it, and other nearby residents add tens of thousands to the rolls of those affected by this health crisis. Some of the plant’s neighbors have taken steps to commence litigation proceedings against Sterigenics.

In response to the remediation plan and proposed reopening of the plant’s ethylene oxide sterilization operations, House Republican Leader Jim Durkin and Representative Deanne Mazzochi have co-led the filing of an amicus brief in the Circuit Court of the Eighteenth Judicial Circuit in response to the proposed consent order that will allow for the re-opening of the Sterigenics facility in Willowbrook.

“Sterigenics has lost the right to operate in our community,” said Durkin. “This brief lays out the steps taken by the General Assembly, through The Matt Haller Act, to ensure corporate polluters like Sterigenics can’t harm any more of our state’s residents.”

The brief provides the court with additional background regarding the language in, and the intent of, The Matt Haller Act to show that the legislature appropriately addressed the issue of ethylene oxide in Illinois and that any attempts to circumvent the law are misguided and a misinterpretation of the law. A copy of the amicus brief can be found here.

The Matt Haller Act, enacted in the 2019 spring session by the General Assembly, contains numerous provisions intended to reduce ethylene oxide emissions within Illinois by 99.9%. The law is named in honor of Matt Haller, a local victim of fatal stomach cancer who lived adjacent to the Sterigenics plant until his death in March 2019.

Name added to State Police Memorial Wall. In a ceremony held in Springfield on July 20, the family of Trooper Brooke Jones-Story unveiled the addition of her name to the list of state police officers inscribed at the Illinois State Police Memorial Park. The ceremony followed the death of Trooper Jones-Story on March 28, 2019 on U.S. Highway 20 near Freeport, Illinois. The police officer had been conducting a traffic stop, and was hit by a heavy truck driver who had failed to observe the “Move Over” law. This law requires drivers to move over, or sharply slow down, in order to avoid endangering a first responder who is on or next to a working highway.

As a response to Jones-Story’s death in the line of duty, and as a response to the deaths of other first responders, the spring 2019 session of the General Assembly enacted new legislation to sharply increase traffic penalties for failure to obey the “Move Over” law. The ISP Memorial Park is located at Lawrence and South Sixth Streets in central Springfield, the state’s capital city.

Governor Signs Demmer Legislation Improving Patient Access to Prescribing Psychologists.Illinoisans living in rural or underserved parts of the state will have better access to quality mental health services thanks to legislation State Representative Tom Demmer championed this year. The legislation, which improves the licensing process for psychologists who want the ability to write prescriptions, was signed into law as PA 101-0084 on Friday, July 19.

“In 2014, a law took effect that provided for a new classification of clinical psychologists who could write prescriptions for patients,” said Demmer. “As the first groups of students moved through the steps of this new licensing process, many found the requirements difficult to achieve due to limited locations where clinical training could take place. SB 1135 expands the list of educational settings where clinical work can be done and should increase the number of prescribing psychologists who enter the workforce. At a time when we face a shortage of mental health professionals in Illinois, this new law will go far in improving access.”

June 2019 unemployment rate drops in Illinois. The Illinois Department of Employment Security report for June 2019 indicates that the jobless rate dropped in the most recent 30-day period, decreasing from 4.4% in May to 4.3% in June. This approaches the 4.0% level that is usually taken to indicate “full employment.” There was a net increase of 11,400 Illinois jobs during the month, with new jobs concentrated in leisure, hospitality, trade, transportation, utilities, professional services, and business services. People seeking new opportunities in these and other job areas may utilize Illinois Job Link to match their resumes with posted job offers from more than 10,000 Illinois employers.

Positive job figures were reported from eleven of the fourteen major Illinois metropolitan areas. On a year-over-year basis, Illinois gained 94,700 nonfarm payroll jobs from June 2018 through June 2019. However, the new growth was not evenly distributed throughout Illinois. More than 80% of the net new jobs (80,400 jobs) were created in the greater Chicago metropolitan area. More than half of the remaining net new jobs were created in Downstate metropolitan areas such as Peoria and Champaign-Urbana that have State universities or teaching hospitals, rather than in rural areas and smaller towns. Job creation continues to focus on tertiary services, and new job creation continues to move to service-oriented hub locations within Illinois.

Legionella water rule cleared by legislative panel. The rule responds to the increasing threat of Legionella bacteria, a single-celled predatory organism that can thrive in lukewarm tap water. The bacteria, which spreads through systems such as air-conditioning condensers that turn tap water into droplets and fine aerosol sprays, causes “Legionnaire’s disease,” a serious threat for many people with other health challenges. Humans breathe in the droplets and the Legionella bacterium enters their lungs, causing a potentially lethal, pneumonia-type illness. For people with compromised immune systems, which includes many older Illinoisans, Legionnaire’s disease can kill. Outbreaks of Legionnaire’s disease at the Illinois Veterans Home in Quincy have led to the deaths of 13 elderly veterans under State care.

In response to this threat, the Illinois Environmental Protection Agency (IEPA) and the Pollution Control Board (PCB) have prepared a rule to toughen chlorine mandates upon suppliers of public water supplies. The increase in the amount of chlorine that must be in Illinois tap water, to 1.0 mg/liter of water (0.5 mg if the chlorine is chemically free, unbound chlorine), is justified as an element in Illinois’ overall fight against Legionnaire’s disease. A bipartisan panel within the Illinois General Assembly, the Joint Committee on Administrative Rules (JCAR), gave permission to file the rule and put it into effect, thus increasing the safety of the tap water of Illinois. Permission was granted on Tuesday, July 16.

Illinois’ first capital city is now nearly a ghost town. When the Illinois Territory was admitted into the Union in 1818 as the twenty-first state, the territorial residents chose the Mississippi River port of Kaskaskia as Illinois’ first capital. Here the first General Assembly met, and here the first Constitutional Convention drafted the new state’s first Constitution for submission to the people and ratification into law.

Kaskaskia was a small, thriving riverfront city with offices, stores, and warehouses. A house-sized brick office building was the first Capitol of Illinois, where the first House and Senate met. By flooding every year, the Mississippi River discouraged local property owners from taking steps to enhance development. The wet, muddy conditions encouraged early lawmakers to pull up their stakes and move above the bluff and over to the southern Illinois settlement of Vandalia, Illinois’ second capital. The move was completed only two years after statehood, in 1820.

After Kaskaskia ceased to be Illinois’ capital city, more hard times came to the river port. Doctors did not yet know the role of mosquitoes in spreading diseases such as malaria and yellow fever, and local wetlands threatened lives. Floods continually worsened as American pioneer farmers cut down trees, broke prairie sod, and released liquid fans of mud and silt into the great riverbed. Seeking a path down to the Gulf of Mexico, the river’s water tore away at its banks and found a new channel along the southwestern border of Illinois. The new channel was directly on top of Kaskaskia.

By the 1880s, it was clear that the historic settlement was doomed. Some of the residents moved to nearby farm fields on what was now the west bank of the river, on a ripple of land that projects into Missouri. There they tried to build a new town, but their new location was not suitable for a river port and there was no reason for people to use the location as a place to live and conduct business. The population dwindled down to 13 people in the census of 2010. Now a tiny village, Kaskaskia remembers its significant Illinois past.