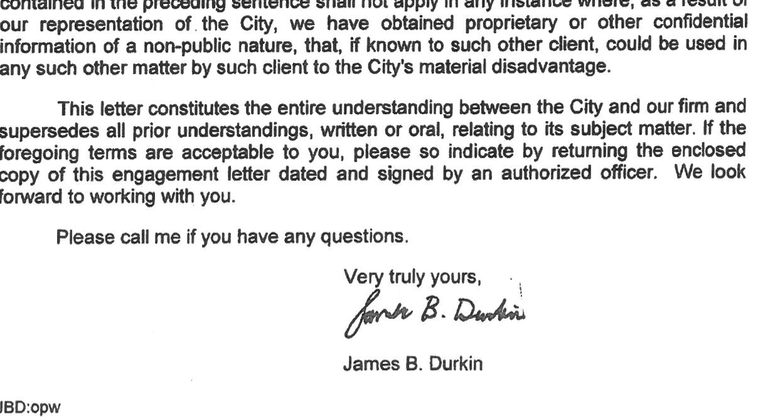 State Representative Jim Durkin (R-Western Springs) wielded his position as Minority Leader to push legislation that would create more work for law firms like his by encouraging municipal government entities to go further into debt through the issuance of more bonds -- protecting bondholders over taxpayers, along the way.

The “horrible conflict of interest” was noted by municipal bond expert Mark Glennon in a story published October 2 in Prairie State Wire.

Glennon, publisher of WirePoints Illinois Financial News, said at the time he was "stunned when I found out what law firm Durkin was associated with.”

Records just obtained through a Freedom of Information Act (FOIA) request show that the City of Berwyn has made six payments to Saul Ewing Arnstein & Lehr totaling $198,000, since Nov. 2012.

In a letter dated February 4, 2015, Durkin wrote Berwyn City Administrator Brian Pabst that the firm was pleased to serve as bond counsel for Berwyn to cover the issuance of its Series 2015 Taxable Bonds.

Durkin added that his fee for the work would be $35,000 due at the issuance of the bonds.

“If for any reason, the bonds are not issued,” he wrote, “we will expect to be compensated at our normal hourly rates of $400 to $450 per hour for the time actually spent on the proposed transaction.”

A May 2017 letter from Durkin to the city was worded the same way except for the reference to the bonds. They were Series 2017A Taxable Bonds instead of 2015 bonds. The fee was the same.

The City of Berwyn currently has $277 million in debt, or the equivalent of 46 percent of the total value of all real estate within its boundaries, according to the Illinois State Comptroller.

It adds up to $20,639 in city debt per Berwyn residential property.

This debt has led to spiking property taxes and is weighing on home values in Berwyn and all of the western suburbs, according to an analysis of real estate sales by Local Government Information Services (LGIS), which publishes West Cook News.

The legislation backed by Durkin would effectively allow local governments to transfer ownership of future income to a lender by creating a separate entity where the bondholders would get first dibs in the event of a bankruptcy.

“It allows governments to borrow more and the assets are held by the bondholders and not the taxpayers,” Glennon said. “Almost no one outside the bond community gets this. What they’re doing is ‘collabering up’ all the assets they can with liens and mortgages, ensuring they’ll get everything when things crash.”

Yet, Durkin neither disclosed his work with the law firm, nor offer to recuse himself when voting to support the legislation, which Glennon described as “an obscene sellout to the municipal bond industry and betrayal of the public interest.”

Completed deals since 2015 touted on the firm web site total $264 million, including $60 million for Hoffman Estates, $27 million for Berwyn, $11 million for Orland Park, and $10 million for Matteson.