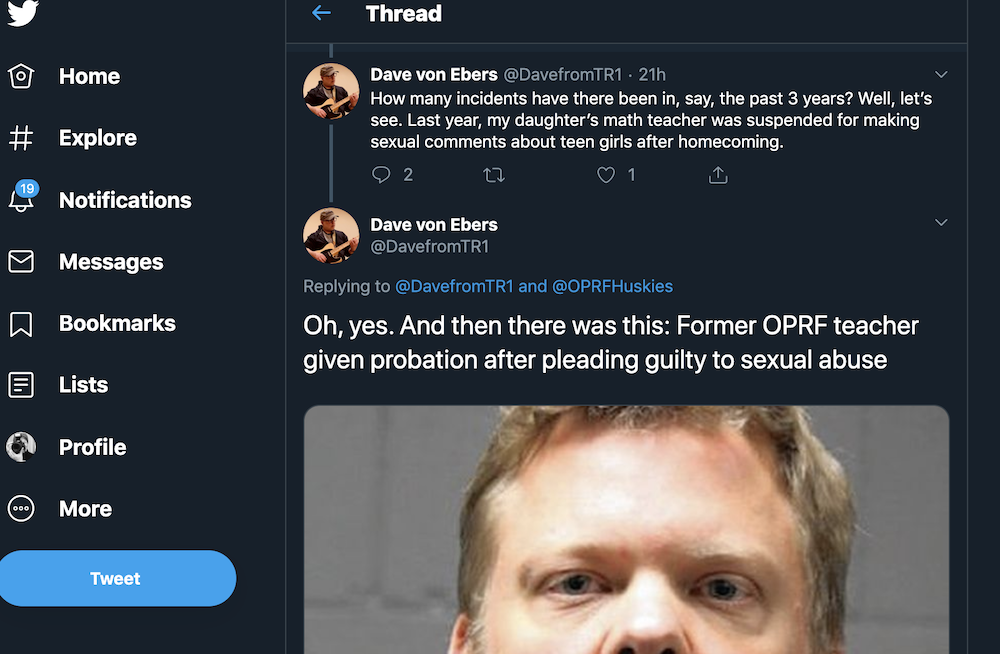 Oak Park River and Forest High School (OPRF) has instructed its staff not to discuss an investigation into allegations of inappropriate conduct by a teacher, WGN News reported on Wednesday.

The allegations are sexual in nature, a source told West Cook News. The teacher is on a leave of absence.

WGN reported that an internal memo “instructs teachers and staff not to discuss the allegations and provides a script to discourage speculation: ‘This really is not an appropriate topic of conversation, let’s change the subject,’ the memo suggests adults say to each other. If a student expresses concern about the situation, the memo encourages staff to have them talk with their counselor or school social workers.”

The district has also postponed its annual Parent Visitation Day, which was scheduled for next week. It’s been moved to January 15 due to “scheduling conflicts,” an email from the district to parents said.

A spokesperson for the district repeated in an email that the visitation day was moved due to “scheduling” conflicts and had nothing to do with the investigation into the teacher. The district had no further comment on the matter.

A separate email to parents from OPRF Superintendent Joylynn Pruitt-Adams said that the district was aware of stories circulating around the absence of one of the teachers.

"In situations such as this, rumors and gossip can spread, often to the detriment of all those involved," she wrote. "We encourage you to refrain from contributing to speculation and hearsay.”

The investigation into the teacher’s conduct will mark at least the third such investigation in three years: in 2016 a former teacher pleaded guilty to sexual abuse of a student, and last year a teacher was suspended for sexual comments directed at students.

“How many incidents have there been in, say, the past 3 years?,” Dave von Ebers, a legal editor for Thomson Reuters, wrote on his personal Twitter account. “Well, let’s see. Last year, my daughter’s math teacher was suspended for making sexual comments about teen girls after homecoming.”

Ebers also tweeted that in 2016 former OPRF teacher Jeremy Lind was given probation after pleading guilty to the aggravated criminal sexual abuse of one of his former students.