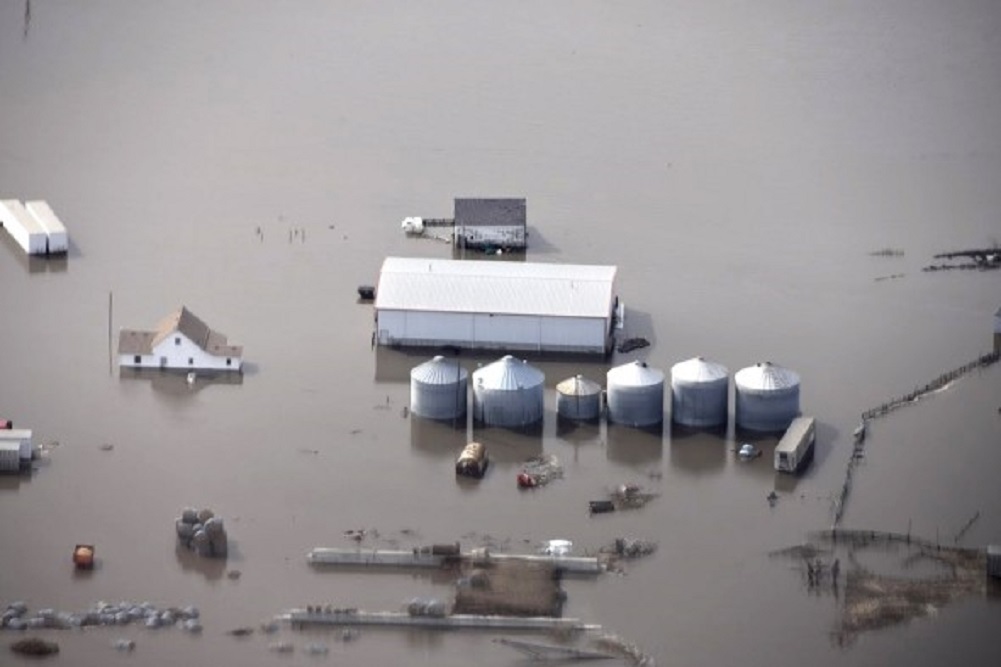 Illinois planting season affected by wet weather. The exceptionally wet spring 2019 season made work in many fields very difficult during the usual planting weeks of April and May. Days suitable for fieldwork finally appeared through much of Illinois in early June, with farm observers reporting a mean of 4.5 days suitable for fieldwork during the week ending Sunday, June 9. The U.S. Department of Agriculture reports that as of June 9, 73% of the Illinois corn crop had been planted; this compares with 100% planting at the comparable date one year earlier. The report for Illinois soybeans shows a similar picture, with 49% of the Illinois bean crop planted as of June 9 as compared to 96% on the comparable day one year earlier.

The slow planting progress has created a developing picture of a challenging grow cycle and possible challenging harvest conditions. As of June 9, 53% of the Illinois corn crop was ranked as fair, poor, or very poor, with only 47% of the crop ranked as good or excellent. With regard to Illinois farm fields, 42% of the acreage was ranked as having surplus topsoil moisture, a condition that can include patches of persistent mud and crop death in low-lying stretches of the fields. Dry, sunny conditions could create some improvements in these numbers.

Flooding conditions continue along Illinois, Mississippi Rivers. High water marks not seen since the Great Flood of 1993 are straining levees and forcing the sandbagging of riverfront properties up and down Illinois’ largest waterways. Some of the levees that protect the Illinois River and Mississippi River bottomlands have given way, creating property damage and forcing evacuations. Areas where two or more rivers come together, such as Alexander County in far Southern Illinois where the Ohio and Mississippi Rivers meet, face particular challenges.

In addition to losses of some bottomland homes and businesses, Illinoisans are affected by the closure of key roads and bridges. The Illinois Emergency Management Agency (IEMA), which has jurisdiction over Illinois disaster relief, has been mobilized since mid-March, and has focused an increased level of disaster relief operations in East Cape Girardeau in hard-hit Alexander County. On May 31, Gov. Pritzker issued a flooding disaster declaration in response to the emergency. The disaster declaration covers human and property damage in 34 listed counties within central, western, and southern Illinois. Some flood relief may come over the next few weeks, as water levels farther up the Mississippi River have begun to drop back towards normal levels. The welcome relief affects towns and cities in eastern Iowa and northwestern Illinois.

Free Fishing Days declared for Friday, June 14 through Monday, June 17. The no-license-required declaration was posted by the Illinois Department of Natural Resources (IDNR). IDNR often celebrates the end of the school year with a family-friendly holiday from fishing license requirements to encourage families to take up the sport and to bring young people into the fishing experience. Many lakes, ponds, and streams are publicly stocked with fish to catch and keep or to return to the water. IDNR has posted a list of recommended lakes and ponds for youth fishing.

MetroSouth Medical Center, key Blue Island health care provider, could close. The Chicago-area south suburban hospital supports over 1,000 Cook County jobs. Its owner, which has asked for permission to close the hospitalon December 31 of this year, said the facility lost $8.4 million in 2018. Further losses exceeding $10 million are expected in 2019.

The MetroSouth Medical Center in Blue Island has 314 beds licensed for overnight patients, but on a typical night only 100 patients are staying there. The hospital has to support all of the fixed costs of a facility with 314 billed beds, but less than a third of the beds are filled with patients for whom the hospital can send a bill for payment. Furthermore, the hospital faces the financial challenges common to all Illinois hospitals with a significant Medicaid patient load. The hospital’s CEO, John Walsh, says that one path forward for MetroSouth would be to close its inpatient wards, but maintain the status of part of the complex as a freestanding emergency department (ER) and outpatient treatment center. The proposal may soon be discussed at a public hearingof the Health Facilities & Services Review Board.

Under this plan, patients who present at the MetroSouth ER after the closure, could be transported by ambulance to other hospitals if they require inpatient treatment. Walsh says that several unnamed organizations are doing due-diligence inquiries to research whether they should make a bid for the complex as an ER/outpatient center. MetroSouth’s closure request will have to be approved by the Illinois Health Facilities and Services Review Board, a state panel that has authority over hospital closure requests in Illinois.

The Illinois General Assembly joins Lucy Kuelper in urging Illinois drivers to “Move Over” when they see a stopped emergency vehicle by the side of the road with its lights flashing. A two-bill package passed by the House and Senate in 2019, SB 1862 and SB 2038, contains new provisions of Illinois law. The new “Move Over” laws, also referred to as “Scott’s Law” in honor of fallen Chicago first responder Lt. Scott Gillen, increase penalties for violations and add a “Move Over” question to the mandatory drivers’ knowledge tests given by the Office of the Secretary of State to applicants for drivers’ licenses in Illinois.