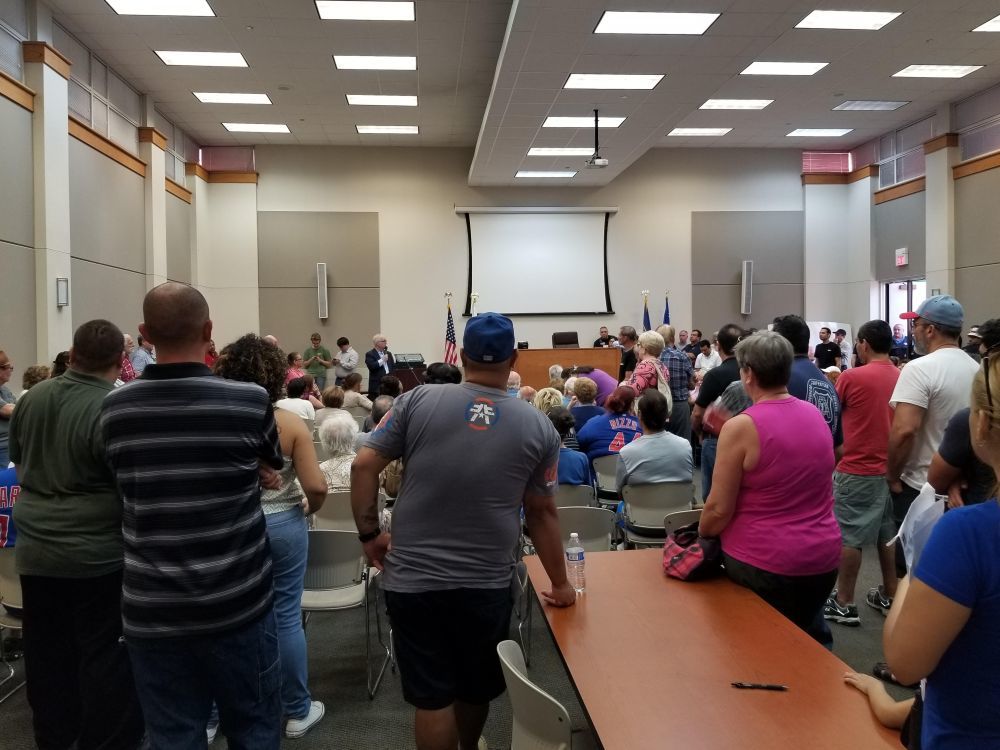 Taxpayers in the Berwyn School District 100 recently stood along the aisle and outside the door of the Berwyn Police Station's Community Room to protest property tax increases.

“The police opened a door up in the front since it was jammed packed,” Jim Tobin, president and founder of Taxpayers United of America, (TUA), told the West Cook News. “The venue holds 200, but 300 showed up.”

The July 23 protest was the result of rising property taxes placed on Berwyn School District taxpayers after a referendum passed last year that had an estimated increase of $300 for the community’s average homeowner.

“I started out the meeting by asking how many of their property taxes have increased by $1,000 or more, and all of them raised their hands,” Tobin said. “Eventually (the question) went up to $7,000 in a single year and two people were left with their hands raised. I could have started a property tax strike right there.”

Rather than a revolt, Tobin informed taxpayers if they wanted immediate tax relief, the school board could give it to them.

“It’s a matter of being persistent,” he said. “I told them if they don’t do it at the Wednesday school board meeting to go back to the next meeting and the next. That’s where to start.”

Berwyn School District should have realized there would be a backlash by going to referendum, Tobin said.

The last thing citizens should do is vote for a school property tax referendum because districts are over-funded and fat with cash, he said.

“One very important item we released on Monday is that the school board has a surplus of $5 million already sitting in its checking accounts, according to a school board document dated June 28,” Tobin said. "I suggested they ask the school board to cut property taxes up to $5 million or at least $3.5 million."

Tobin said others were disrupting his presentation during the protest.

“They were there heckling me; they didn’t like what I had to say about (Democratic gubernatorial candidate) J.B. Pritzker,” Tobin said. “The 'Demorats' jeered at me saying, ‘how dare you politicize the meeting,’ but I said you have to know who your friends and enemies are.”

A recent TUA survey found that Gov. Bruce Rauner is still well-liked with a 98 percent rating. Most governors score around 20 to 30 percent, with former Gov. Pat Quinn scoring close to zero when he was in office, Tobin said.

TUA does not plan to hold another protest because of the costs incurred. The Berwyn protest cost the group approximately $5,000, but they were able to make the point the group intended to make, Tobin said.