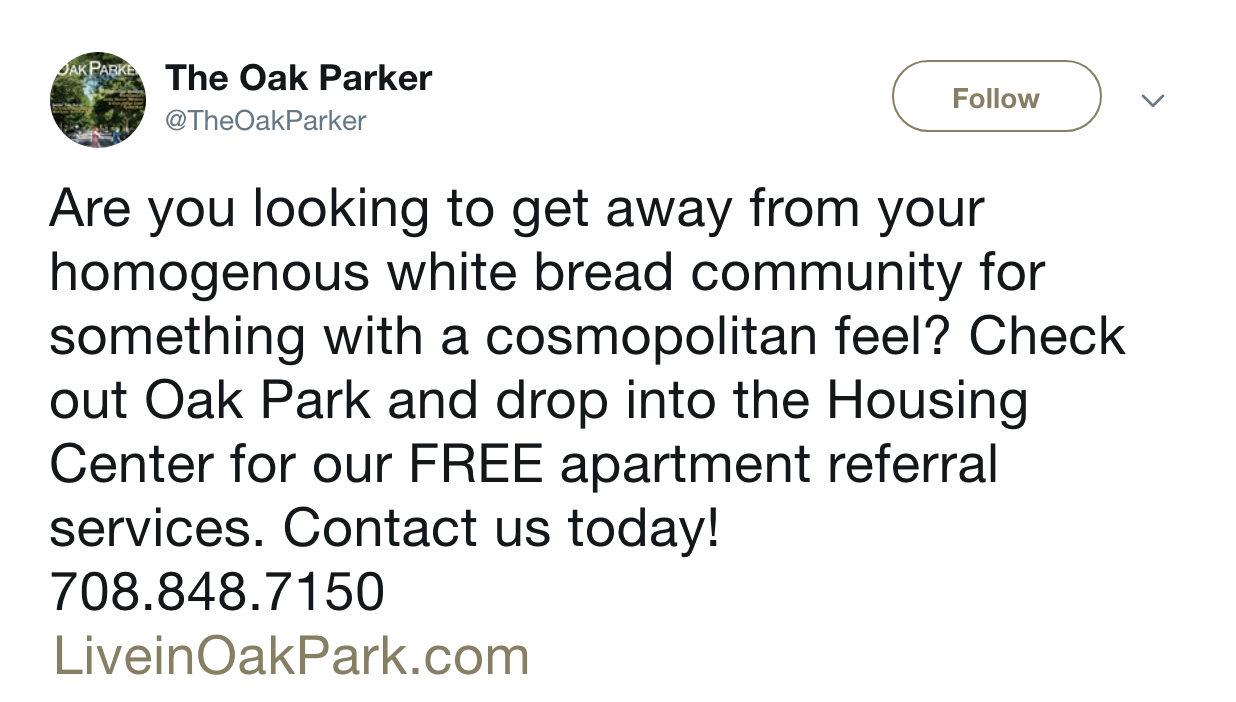 The taxpayer-funded Oak Park Regional Housing Center is encouraging people to move away from suburbs its leaders believe are too white.

A taxpayer-backed Oak Park non-profit that aims to convince black and hispanic renters to move to the town is trying a new tactic: panning rival suburbs as undesirable for having too many white residents.

"Are you looking to get away from your homogenous white bread community for something with a cosmopolitan feel?" tweeted the Oak Park Regional Housing Center (OPRHC) on Thursday. "Check out Oak Park."

This includes posting on social media, selling "Hate has no home here" yard signs for $10 each and publishing an online magazine, The Oak Parker.

OPRHC has received $7.8 million in taxpayer funding over the past ten years, according to a West Cook News analysis of its filings with the U.S. Internal Revenue Service.

According to its most recent filing, in 2017, it received $820,000 from state and county taxpayers, 60 percent of its total budget of $1.341 million. Most of that-- $596,000-- came from Village of Oak Park property taxpayers. The remainder of OPHRC's revenue came from private donations.

After 12 years heading the group, Breymeier left OPRHC in May 2018 to be Chief Operating Officer of housing at Heartland Housing, another non-profit that advocates for more housing regulations. It received $5.9 million in taxpayer funding in 2018, according to its annual tax filing.

According to a 2006 profile in the Wednesday Journal, Breymeier grew up in a "nearly all-white" suburb of Toledo, Ohio. In his first presidential election, he says he voted for Chicagoan Jesse Jackson in the 1988 Democrat primary.

"The kind of people we want to live in Oak Park"

Oak Park was one percent black when Bobbie Raymond started what she called the Oak Park Housing Center in 1972.

Raymond's advertising was crafted to appeal to the "the young, somewhat liberal couple or individual who probably believes that an integrated community is the right place to live in," she said. One of the center's advertisements ran in Ms. Magazine, founded in 1972 by feminist Gloria Steinem.

By 1980, eleven percent of Oak Park residents were black, according to the U.S. Census.

The center's efforts were funded exclusively with private donations in its nascent days. Its budget was $26,500 in its inaugural year, or $162,500 in 2019 dollars; revenue came exclusively from private and corporate donations-- CNA Financial and Wieboldt's were major supporters.

But by the late 1970's, the OPRHC was receiving a majority of its annual budget from taxpayers.

How much have taxpayers given to the Oak Park Regional Housing Center over the past decade?

*2015 numbers are estimates based on available data; the OPRHC has not made its 2015 IRS 990 available to the public.

Want to get notified whenever we write about Oak Park Regional Housing Center ?

Sign-up Next time we write about Oak Park Regional Housing Center, we'll email you a link to the story. You may edit your settings or unsubscribe at any time.